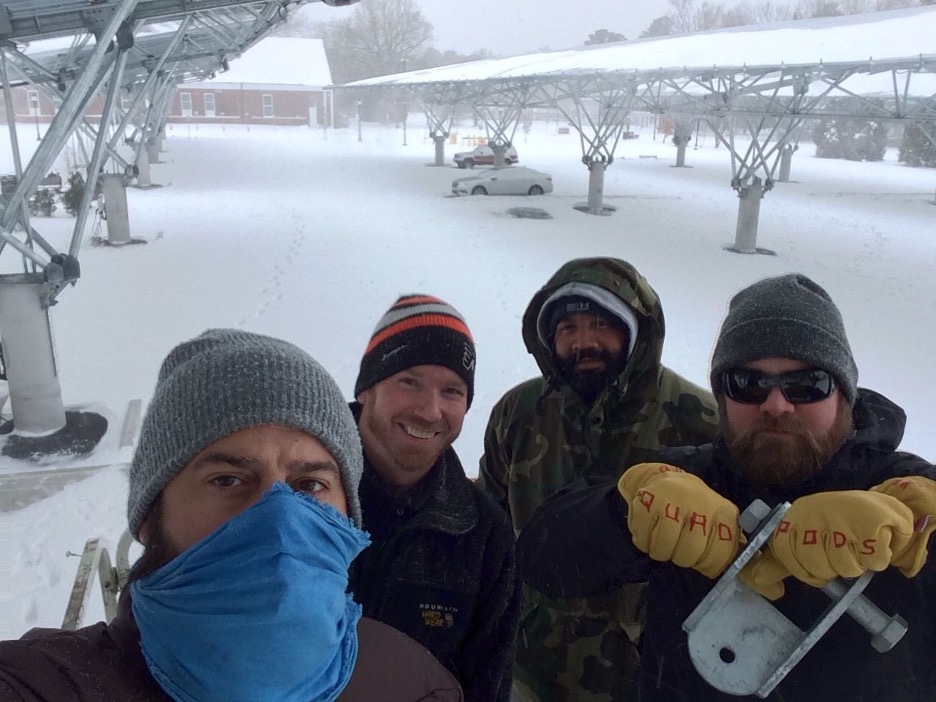 30 OctSnow Management for Your Solar Canopy

The weather is changing which means snow season is upon us!

Many people are dealing with snow management for their homes and businesses—but what about solar arrays? As a company that has provided over 10 MW of canopy racking systems in the Midwest and Northeast regions, Quest Renewables frequently deals with snow management concerns and issues.

Snow is sticky, and tends to build up along the lower edge of the panel. Luckily solar panels tend to conduct heat, which means that snow never sticks to the panel for very long. This is a good thing because snow is less of a threat to energy production. However, when snow does melt off the panel it tends to do so in blankets (yes, like a small avalanche), which can be destructive to property and hazardous to people underneath. This issue is particularly important to address in the canopy industry because canopies fundamentally enable activities to take place underneath the array. Also – roofs are designed to retain snow and shed snow gradually to prevent hazardous melt off.  In order to protect the dual-use function of the array, it is important for site owners in snow-prone regions to plan ahead for snow management.

The thing about winter storms is this: many people often think they can do without snow management until they are faced with the first big snow storm. When site operators encounter their first major storm after a solar installation, they typically experience some or all of three problems: 1) large sheets of snow fall off the array, potentially damaging people or property; 2) icicles form on the array and fall off; or 3) melted water refreezes on the parking surface.

The second decision a site owner faces is whether or not to use a “snow fence” otherwise known as a “snow rail,” or an alternative known as a “snow guard.” A snow fence or snow rail is affixed at the lower edge of the solar module, as shown below. Snow rails have their benefits because they do not interfere with sun capture, since they are affixed to the bottom of the panels.

On the other hand – snow guards are small attachments that resemble a coat hook, which are affixed between panels throughout the array. Snow guards are great because they enable greater friction throughout the entire system, which slows melt off. However, the downside of snow guards is that they may slightly interfere with the energy production, since they add minor shading to the panels.

What About Melt Off?

Once snow capture has been managed, site owners face the decision of whether to do anything about residual melt off. Panels get hot quickly, so the snow that is retained melts quickly. While that is generally a positive function, it results in melting which can cause two problems: (1) icicles may form, which then fall off and damage property or injure people and/or (2) melted water along the surface of the panel may refreeze as it melts, creating a hazard for vehicles and people while also reducing energy production. Where these issues are a concern, the best solution is to close off the area between the panels and install a gutter at the low end of the array to capture the water. Additionally, extension gutters enable water and snow to be diverted from buildings and foundations.

If a site owner chooses to purchase a gutter system, there may be a concern about water freezing in the gutters. If this is a concern, site owners can install heat strips along the gutter channel.

If you are unsure about which snow management system is right for you, seek advice of a professional. However, it is easy to get a general idea of what is effective for your area by seeing how snow is managed on large surfaces, even if they aren’t solar.

If you have additional questions about snow management for your upcoming solar canopy project, contact the Quest Renewables team at sales@questrenewables.com, or by phone at 404-536-5787.