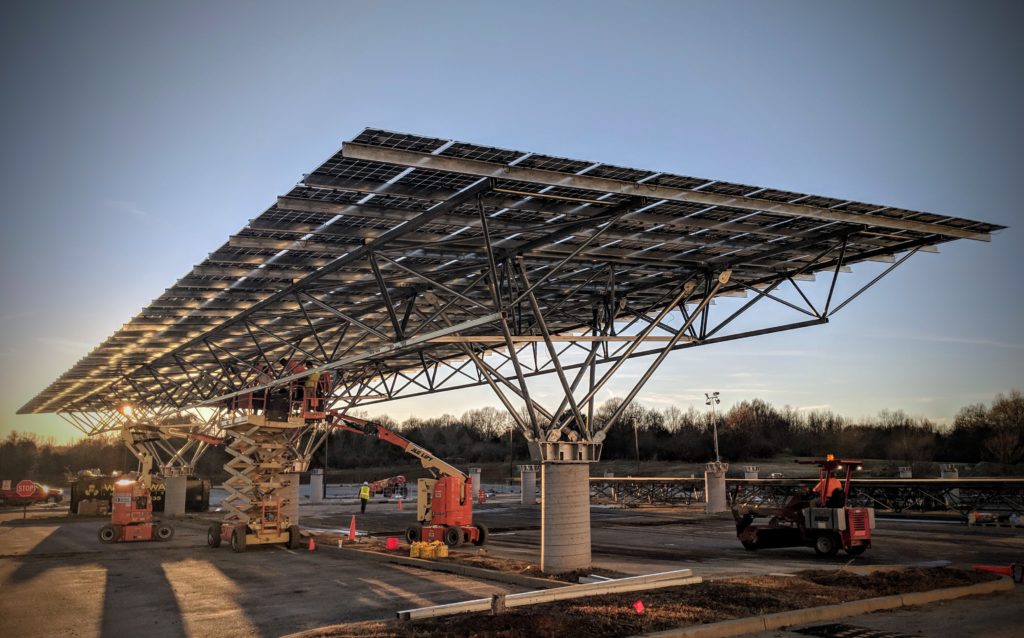 In an article he wrote for Solar Power World, Michael explains that solar carports differ from ground-mount and rooftop systems in that they provide benefits to business owners and patrons through enhancements to the built environment.

Here is Michael’s article in its entirety:

Developers and EPCs need to move away from pitching solar carports primarily as a means of delivering kilowatt-hours. It is time to look at financing with carports differently; the solar production acts as a means of funding physical infrastructure. It is a different mindset — focusing on the value of structural amenity and its benefits to business owners and their patrons, with the energy savings being the revenue stream which pays off the structure’s mortgage.

This approach involves breaking away from how solar is traditionally marketed, which focuses heavily on economics, “this is how much you will save by going solar.” While effective for rooftop and ground-mount solar, this methodology falls short when selling carports as it fails to adequately capture the full value of the product. For a rooftop or ground-mount system, oftentimes the goal is to minimize the spatial impact of the system. Customers tend to prefer a solar system that is not obstructive and out of sight, if possible. Solar carports differ fundamentally in that they are an enhancement of the space they occupy alongside the energy they produce. Solar developers and EPCs need to account for the unique benefits solar carports offer and market them accordingly.

Some of the benefits of a solar carport are easy to identify. In addition to providing shade, these structures also function as a shelter from inconvenient, or even costly, weather events. People are always relieved to have covered parking during rain or snow, but they are even more thankful during a hailstorm. For some businesses, such as auto dealerships, installing a canopy system can lead to a direct economic payback, with many insurance companies offering more attractive premiums and lower deductibles if vehicle inventory is housed under covered parking. These benefits are primary factors driving the sale of standard carport systems and these benefits need to be factored in when communicating with customers.

Moreover, there is inherent value in the carport as an architectural fixture that enhances the business’s built environment, which offers benefits not only for patrons but also employees. When we talked with Armen Zadoorian, senior engineer at AVX, a leading international electronics manufacturing company that completed a nearly 1-MW Quest Renewables carport in 2019, he outlined the numerous benefits the system has on the work environment. “People brag when they get a spot to park underneath the canopies,” he told us, going on to say that employees have started opting to spend their lunch breaks in the now shaded grassy area or sitting in their shaded cars under the canopy. In the case of the system at AVX, the customer not only achieved its corporate goals to produce solar energy, but it in effect expanded the livable space of its work environment.

Aesthetics and public image must also play a central role when making a pitch for solar carports. Sustainability has become an inherent value in today’s society, driving an increasing number of major corporations, such as Amazon, Apple and Delta, to make highly ambitious public pledges to strive toward 100% sustainability and net-zero carbon emission. A well-designed carport can be a powerful, attention-grabbing structure, and businesses can reap the benefits of such an investment in the form of increased positive publicity. This can serve to enhance a business’s public image, communicating that it is forward-thinking and cognizant of its impact on the environment. A solar carport can draw the respect of other like-minded members of the community, functioning as an open invitation to potential patrons to share in that mission.

Whether it be a solar rooftop, ground-mount or carport, each solar system type has its own unique set of advantages and disadvantages which should not be measured against each other using a standard metric. As we recognize that solar carports are distinct from rooftop and ground-mount systems, we must also acknowledge that customers are not uniform in their interests. Doing so will not only allow for a more holistic view of the solar industry’s target customer base but will also encourage the solar industry to expand that market and reach new customer types. If we want to market solar carports — or any solar system for that matter — more successfully, we must look beyond what can be quantified in spreadsheets.